Valientes win for the fans, Black Bears pull of the upset in Batam

It’s only the first day in Batam and we’re already off to an exciting start in the second circuit of
the 2023 ABL Invitational with the Macau Black Bears and Zamboanga Valientes emerging with
wins.

Right off the bat, the Black Bears stunned the formerly undefeated Hong Kong Eastern side by
winning, 71-67, in a game where they never fell behind. Macau actually built up a lead to as
much as 15 points late in the third quarter, but Eastern rushed their way back into the game
with a 14-0 run to put the fans back into their seats.

From there, Isaiah Wade took over and scored 10 of his 22 points in the last 6 minutes of the
game to ensure the Black Bears a victorious revenge. Wade also collected 14 rebounds to keep
his double-double streak alive, now at 4 consecutive games.
The Black Bears were fueled purely by their starting 5 as they had no bench points, but received
21 points from Dequan Abrom, 13 points from De’Angelo Hamilton, and 12 points from Jenning
Leung. 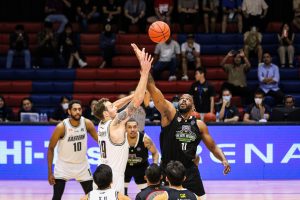 Eastern made a good effort to move the ball around with 26 field goals made off of 21 assists,
but they struggled to connect from long range, going only 5-24 from downtown. It was a rough
game for O’Darien Basset who scored only 2 points on 1-8 shooting after heading into the game
averaging 19.3 points per contest. Instead, Eastern relied on the force of Chris McLaughlin (20
points), Dominic Gilbert (17 points), and Tonny Trocha Morelos (16 points).

In the second game of the day, Zamboanga Valientes has no problem taking care of a
shorthanded Bangkok Tigers side, 118-73.

The massive victory was powered by the club dedicating the game to all the flood victims in
Zamboanga City. Aside from a donation being made by the team owners, the game was also
treated to a live viewing in the evacuation center at Pasonanca. There was an additional
incentive for the player to display their offensive chops as the club committed a number of
donations to each point made by the local players on the team.

The game started out slow with Valientes up by only three points at the end of the first quarter.
However, the Filipino club left the Tigers in the dust after scoring over 30 points in three
straight quarters from there on out. 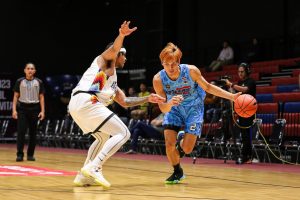 Zamboanga were firing all cylinders on offense with 7 players scoring in double-digits,
highlighted by 3 that reached the 20-point plateau. Team captain Rudy Lingganay stood out
with 20 points in 17:23 minutes, all the while missing only one of his 8 shot attempts and
dishing out 5 dimes. Ryan Smith also had a monstrous game for Zamboanga with 17 points and
24 rebounds to his name.

For Antonio Hester, it was a typical game for him with 26 points, 12 rebounds, and 5 assists.
The Bangkok Tigers had 4 players scoring in double-digits in this game while adjusting to major
changes throughout their roster. Newcomer Jose Nouchantavong led the team with 16 points,
while local guard Takamin Sirijariyaporn had his best game yet with 14 points, 4 rebounds, and
3 assists.