The first triple-header of the 2023 Invitational ends with Saigon Heat, NS Matrix Malaysia, and
Hong Kong Eastern are the ones to come away with wins.

The first game of the day was a historic one as the Saigon Heat defeated Louvre Surabaya 108-
47. The 61-point victory marks the biggest margin ever in an ABL competition, surpassing the
54-point win by Singapore Slingers over KL Dragons back on November 23, 2018. 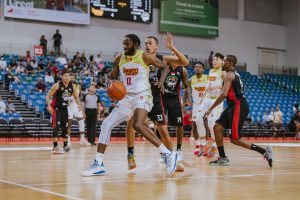 Saigon Heat shot 53 percent from the field and made 19 of their 40 three-point attempts while
Louvre Surabaya made only 18 field goals through the game on 24 percent shooting.
Five players for the Vietnamese club scored in double-digits, led by Evan Gilyard who had 27
points to go with 10 assists in this contest. Meanwhile, even though Nguyen Huynh Phu Vinh
did not reach double-digit scoring with 7 points, he did record 18 rebounds which is easily a
career-high and the most recorded in ABL competition by a Saigon Heat local player.

For Louvre Surabaya, Jamarr Johnson and Marcus Hammonds were the two players to lead the
team in scoring with 12 and 11 points, respectively.

That game was followed by a game where Zamboanga Valientes got a taste of their own
medicine, falling to a come-from-behind effort by NS Matrix Malaysia, 86-82.
Valientes led through almost the entire game until a basket by Ting Chun Hong tied the game
up at 80 with 3:32 seconds left. The Philippines side had even led by as much as 15 points early
in the first quarter of the contest. 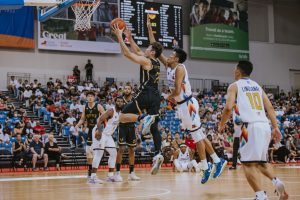 However, NS Matrix rallied back with their strong inside presence of Amir Williams and Tevin
Glass both of whom had double-doubles and were the main contributors to the team’s 40
points in the paint.
Williams led all scorers with 22 points while also grabbing 15 rebounds. Glass had 17 points and
11 rebounds, and also added a touch of facilitating with 5 assists. Star local player Ting Chun
Hong continues to shine as he scored 17 points in this game to go with 7 rebounds and 3
assists. 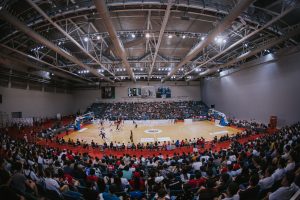 The marquee matchup of the day was saved for last with a 2017 Finals rematch between the
Singapore Slingers and Hong Kong Eastern.

It was a déjà vu of the disappointing finish for the Slingers in that Finals 6 years ago, as Eastern
controlled the game from start to finish to win 68-52.

Despite Eastern playing without import player Chris McLaughlin, they commanded the lead in
the first half and led the entire way through the final 2 quarters.

The key to the victory that would upset the home side was Eastern’s tenacious defense that
kept the Slingers to only 27 percent field-goal shooting. That same lockdown defense held the
ABL’s all-time leading scorer Xavier Alexander to his first ever scoreless game (0-9 field-goals
shooting) in ABL competition and kept Kentrell Barkley, who was averaging over 30 points
heading into this game, to 13 points. The main man on offense for the Slingers would therefore
have to be CJ Gettys who had 25 points and 22 rebounds. 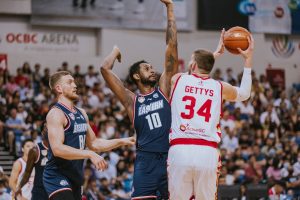 Aside from their defensive excellence, Eastern got a massive offensive display from Dominic
Gilbert who became a starter in his first game in the absence of McLaughlin. Gilbert played all
40 minutes and finished with 29 points and 17 rebounds while shooting 57 percent from the
field and 66 percent from the three-point line.

The Xu brothers, Adam and Oliver, were also very impressive for the Hong Kong club as they
played solid defense throughout the game and combined for 17 points, 7 rebounds, and 4
assists.