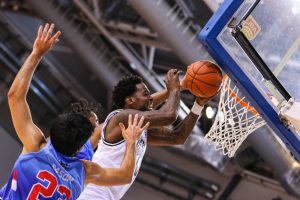 Chris McLaughlin scored the first points of the 2023 which gave Hong Kong Eastern the lead for
good all the way through to the final buzzer. The “rookie” import finished with a team-high 23
points to go with 14 rebounds in his debut.

All Hong Kong Eastern players saw action on the court in the lopsided win where nearly all
players got on the scoreboard as well. Four players scored in double-digits as Eastern shot a
blistering 53 percent from the field in the win.

Cooly Bangkok Tigers struggled to get the offense flowing on their end, as they shot only 30
percent from the field and ended up with only 5 assists through the entire game. Some bright
spots to take away in their debut loss were the performances of the Dasom Brothers, Kittithep
(11 points) and Wuttipong (9 points), and Nicola Franco (10 points, 8 minutes), all of whom are
local players. 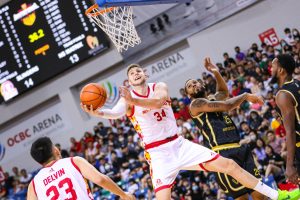 The home crowd had to wait to see their beloved Slingers in action and it turned out to be
worth every second of anticipation. The Slingers ended up entertaining the fans with an exciting
victory over NS Matrix Malaysia that was only decided on a clutch block, 84-82.
The block was recorded by “rookie” import CJ Gettys who wrapped up his debut for the Slingers
with 16 points and 6 rebounds. He emphatically swatted away a left handed game-tying
attempt by NS Matrix’s Tevin Glass in the waning seconds which the crowd responded to with a
loud roar. 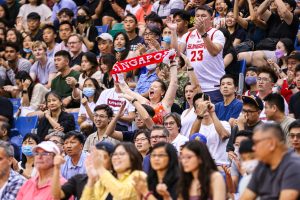 There was plenty of pressure on the Slingers’ end early on as Xavier Alexander picked up three
quick fouls, forcing the ABL’s all-time leading scorer to limited minutes in the ABL’s return. This
allowed the visiting NS Matrix squad to gain momentum early on which they took advantage of
with spirited play.

Though the spotlight for NS Matrix will shine on Tevin Glass who had 36 points, 9 rebounds, 6
assists, and 2 blocks, it was more than a solo effort. Fellow import player Amir Williams locked
down the paint with 14 points, 13 rebounds, and 3 blocks, while local player and ABL veteran
Wong Yi Hou was impressive with 19 points and 3 steals.

NS Matrix built up a lead of as much as 11 points in the later parts of the first half, but the
Slingers battled back into the game at the start of the third quarter once Alexander returned to
the court.

In Alexander’s absence, the Slinger’s other “rookie” import, Kentrall Barkley took over and
immediately made himself a fan favorite. Barkley matched Glass nearly point for point and
ended up with 37 points, 7 rebounds, 6 assists, and 5 steals in his debut.

He is the first Slingers player to reach those numbers in an ABL game. Only three other players
in the history of the league have recorded at least 37 points, 5 rebounds, 5 assists, and 5 steals.
Even though it was the clutch block from Gettys, as well as clutch free-throws from Barkley in
the previous play, the local players of the Singapore Slingers were key in the victory today.
Delvin Goh provided his usual punch of 10 points, 4 rebounds, and 3 assists, while 19-year-old
“true” rookie Zach Helzer stepped up with big moments down the last stretch. In the end, the
exciting youngster finished the game with 7 points and 2 assists.

All four teams in action today get at least a day worth of rest before getting back on the court.
The Slingers and Tigers return on January 4 against each other with the home team hoping to
repeat their pre-season victory to stay undefeated in the 2023 ABL Invitational. NS Matrix
Malaysia will try to rebound by going up against Saigon Heat on the same day.
Meanwhile, Hong Kong Eastern get an extra day of rest as they wait to face Macau Black Bears
on January 5.