On the second to last day in Batam for the 2023 ABL Invitational, the fans were treated to two
intense games between great teams.

The day began with NS Matrix Malaysia collecting their sixth straight win in the competition
over Hong Kong Eastern, 75-70. This win also concluded NS Matrix’s Batam trip where they
went undefeated. This was also the first time in an ABL competition that a Malaysian club beat
Hong Kong Eastern.

NS Matrix were powered in this game by the brilliance of Amir Williams who scored 31 points
on 14-20 field-goal shooting while also grabbing 15 rebounds, dishing out 3 assists, and adding
3 each of steals and blocks to his monstrous stat line.

The Malaysian side also did a good job of protecting the basket as they allowed only 36 percent
field-goal shooting from their opponents.

Hong Kong Eastern struggled with foul trouble in this game, especially in the case of Adam Xu
and Tonny Trocha Morelos. They were able to make a late run in the game with the hot hand
shooting of O’Darien Bassett (27 points, 7 three-pointers) though that was still not enough to
save the day.

With the win, NS Matrix now shoot up to the top of the standings with a 6-2 record, identical to
Eastern though NS Matrix currently holds the head-to-head advantage. 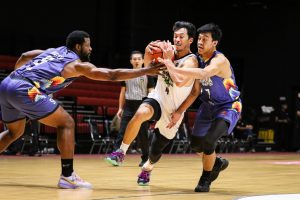 The last game of the day was also an entertaining battle as the Macau Black Bears endured a
late game run by Zamboanga Valientes to win 90-78.

The Black Bears seemed to be in complete control of the game in the first half as they
commanded a 48-31 lead at halftime. However, Valientes came out of the locker room
determined to get back into the game. They chipped away at a lead that was as much as 22
points with run after run until they were finally able to get into the lead for the very first time of
the game.

Unfortunately, that would also be their last lead as the Macau Black Bears quickly reclaimed
their advantage and led the rest of the way. It was a close game towards the end, but nothing
was going to stop Jenning Leung from getting a win in his big night.

The Macau Black Bears star exploded for a career-high 32 points in this contest, shooting 12-25
from the field. Isaiah Wade (20 points, 16 rebounds, 3 assists, 4 steals) and Dequan Abrom (24
points, 9 rebounds, 4 assists) were also key contributors, but this was clearly Leung’s chance to
shine.

No surprise from Zamboanga Valientes that Antonio Hester led the way in scoring for the team
with 23 points. The star also grabbed 8 rebounds and dished out 5 assists in an all around
game.

Macau Black Bears create some separation from Valientes in the standings as they now hold a
4-4 record to end their Batam campaign. They are now at 4th place, but can be overtaken by
the Singapore Slingers in the final game tomorrow (January 18). Valientes hold their spot at 6th
place with a 3-4 record, though they can add one more win to their total on the last day when
they go up against the Saigon Heat.