Another perfect record beats the dust in the second day of the 2023 ABL Invitational circuit in
Batam, Indonesia. It was the Singapore Slingers who handed the Saigon Heat their first loss of
the season, while NS Matrix Malaysia gave the hosts Louvre Surabaya a loss in their home
opener.

In what was a close game down to the wire, the Singapore Slingers claimed their first lead of
the final quarter with just 12 seconds to go on a Xavier Alexander putback to clinch an 84-83
win over the Saigon Heat.

With the victory, the Slingers snap a two-game losing streak carried on with the ferry ride from
their hometown. It was also a significant win as well as it handed the Saigon Heat their first loss
of the competition. The Heat were looking forward to build on their best start to an ABL
competition in franchise history with 5 straight wins, but ran into an opponent they had always
struggled against in the past. This was the 28 th time the two teams had played against each
other where the Slingers now hold the advantage in this head-to-head matchup 22-6.
Both teams took turns controlling the tempo in each quarter, starting with the Heat’s 10-0 run
to start the game. The Slingers responded with a 7-0 run early in the second quarter to take
their first lead of the game.

Midway through the third quarter, however, the Heat exploded for an 11-0 run in a matter of
only a few minutes to get the lead back up to double-digits. The Vietnamese squad seemed to
be in control, holding onto a 9-point lead with 6 minutes left in the game.
However, that was a small enough game for the Slingers to make a comeback. Led by Jackson
Mah who scored 6 points in the game-winning run, the Slingers outscored the Heat 13-3 in the
final 5 minutes to win the game. The go-ahead bucket by Alexander were the only points scored
in the last 2 and a half minutes and it was enough for the victorious Slingers. 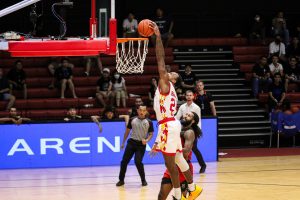 Kentrell Barkley had another big game of 23 points, 15 rebounds, and 4 assists, while Xavier
Alexander compiled an all-around performance of 10 points, 13 boards, and 6 dimes. However,
the spotlight shined on “Jackson” Jun Hao Ma who finished with 13 points on 2 three-pointers
and 4 rebounds in another impressive game for the ABL rookie.

The Heat relied on heavy minutes and production from their starters with 4 of the 5 players in
the starting unit logging at least 35 minutes. Tim Waale did his part with 8 points on 3-3 field-
goal shooting in his starting spot for the first time in coach Matt Van Pelt’s rotation.

Jarius Holder (24), Jeremy Combs (22 points), and Player of the Tournament from the Singapore
circuit Evan Gilyard (20) all got their points and the team shot very well from long range (55
percent three-point shooting) but were unable to keep the Slingers off the glass. 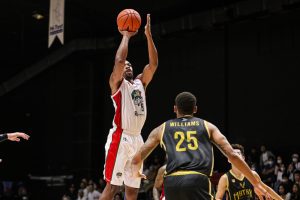 In the second game of the day, Louvre Surabaya were unable to give the home town fans in
Batam what they wanted just yet, suffering another massive loss, 104-67, to NS Matrix
Malaysia.

NS Matrix were in control for nearly the entire game, quickly building up a double-digit lead as
early as the start of the second quarter. However, the home team managed to keep it close and
even take the lead for the first – and only – time early in the second half.
Once Louvre Surabaya went ahead, NS Matrix blasted off for a 15-0 run to take the lead for
good. Just for good measure, NS Matrix blasted off for another 21-0 run in the fourth quarter to
seal the deal.

In total, NS Matrix went on a massive run of 47-6 in the second half.
With Alouine Tew continuing to be hampered with injuries and out of action, Amir Williams had
no trouble whatsoever inside the paint, going for 28 points on 12-14 shooting. Tevin Glass got
close to a triple-double with 18 points, 9 rebounds, and 7 assists. The bench alone scored 46
points in this game for NS Matrix led by 15 points Ooi Xian Fu while also getting contributions
from Kuek Tian Yuan (10 points) and new recruits Heng Yee Tong (8 points) and Jonathan Wong
(8 points, 3-3 shooting).

NS Matrix will get right back to action on January 14 against Zamboanga Valientes as well as
Louvre Surabaya who will face Hong Kong Eastern who are hungry for a rebound win.
The Slingers and Heat both get a day off before getting back on the court on January 15. The
Slingers will face the Black Bears in a match between the two teams that handed the last two
undefeated teams their first loss. That game will be followed by a clash between the previously
undefeated teams themselves, the Saigon Heat and Hong Kong Eastern.