In his first ever game playing in an ABL competition, Singapore Slingers’ Kentrell Barkely found
himself in possession of the ball with 15.0 seconds left in a tied game against NS Matrix
Malaysia.

The contest had been a back and forth affair between the two teams and it was all coming
down to this final play.
14 seconds left. 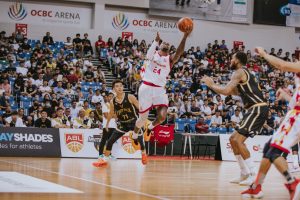 With such little time left on the clock, the usual consensus is that the team and player in
possession of the ball will dribble it out until the final few seconds before making a final attack
that would not give the opposition a chance to have one last attempt. Maybe that’s why Ting
Chun Hong, NS Matrix’s star guard who was defending Barkley, was not fully crouched in a
defensive stance.
13 seconds left.
Maybe that’s why NS Matrix’s big man Amir Williams was not yet in position close to the basket
as help defense even though his primary matchup was far away from even the three-point line.
12 seconds left.
Whatever the case, Barkley saw an open lane to his left. So the left-handed forward attacked,
blowing by Ting and forcing Williams to commit a foul.

“I saw a smidge of an opening and decided to attack because it was unexpected and I drew
some contact,” Barkley said of what was going through his mind in the sequence.
He wasn’t able to score on the initial drive, something Williams made sure of, but had the
chance to give the Slingers the crucial lead with less than 10 seconds in the game.
Without hesitation, Barkley swished both clutch free-throw attempts which eventually gave the
Slingers the lead for good. He’d finish the game with 37 points, 7 rebounds, 6 assists, and 5
steals. This puts him in the company of only 3 players (Kiwi Gardner, Akeem Scott, and Mikh
McKinney) to record at least 37 points, 5 rebounds, 5 assists, and 5 steals in a game. He’s only
one of two players (McKinney) to put up those numbers without playing in an overtime period
and only one of two players (Gardner) to have such a performance in his debut.
And what a debut it was indeed.

Barkley has come a long way leading up to his spectacular debut with the Slingers. In the literal
sense, Singapore is almost 16,000 kilometers away from North Carolina, where Barkley is
natively from.

More than the distance travelled is the journey in development for Barkley. The [SIZE] forward
admits that basketball was not his first sport and even when he made the switch, it didn’t come
naturally.

“When I started, I was bad,” Barkley revealed. “I couldn’t make layups, which is the easiest
things to do. So I did a lot of running the stairs, because I couldn’t make those layups.”
Now, the 26-year-old can make those layups. He’s made more than thousands of layups
throughout his 6-year career, not to mention a healthy portion of slam dunks as well.
It’s a long and winded journey that’s lead him to play in the NBA G League, Australia,
Luxembourg, and, of course, Asia.
Barkley’s stint with the Singapore Slingers here, however, isn’t his first in Asia. He’s already
played two season in the region, both in the Super Basketball League (SBL) with the Taiwan
Beer Bears.

“Singapore reminds me a lot of Taipei,” said Barkley. “The people are really friendly and the
food is amazing.”

With the Beer Bears, Barkley was among the top players in the league and helped the team to a
title in 2020. 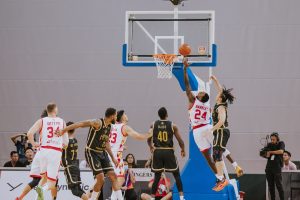 For starters, the new import players like Barkley and CJ Gettys are already producing at a high
level. Returning import player and ABL legend Xavier Alexander had issues with foul trouble in
his first game, but when he’s on the floor, he helps raise the ceiling of the team to another
level. It’s this mix of the old with the new that gives the Slingers a sense of freshness that
blends in quickly with Alexander’s experience.
“[Alexander’s] a vet and he’s showing me the ropes,” Barkley said. “I’m learning every day from
him. He’s a great guy. We spend a lot of time together and I’m thankful that’s he’s on the team
to help me out as much as he can.”
“I think we work great together. Every day, we have to take it one day at a time to get better
and better together.”

More than the production from the import players is the performance of the local players who
perfectly slide into their roles. The two key local players in the first game were Zach Helzer (7
points, 2 assists) and Delvin Goh (10 points, 4 rebounds, 3 assists) and are expected to continue
being impact players whenever available.

“If Del doesn’t bring his contributions to the game, we lose it that night,” said Barkley of Goh.
“He is a beast in the paint and has a good basketball IQ.”

“Zach is a big time player,” Barkley then said about the 18-year-old rising star. “You see him hit
some big time shots. The future is bright for him.”

“He didn’t surprise me [with how he played] because we see him hit big shots in practice.”
When asked to specify which local Singaporean player who has impressed him the most or who
he expects to surprise ABL fans this year, Barkley is quick to reply.
“The whole team, no body individually. The whole team.”

The Singapore Slingers seem to be in a good position to be among the top teams in the 2023
ABL Invitational. Aside from the good form of the players as mentioned, there’s also another
factor early on in this first circuit as it’s played right in their backyard at OCBC Arena in
Singapore.

It’s been almost a full three years since the fans have rushed to pack the stands at the venue
and that’s what they did as they witnessed an exciting win for their team of NS Matrix.
“It was amazing to be a part of such a great crowd like that,” said Barkley. “The atmosphere
was one of the best atmospheres I’ve ever played in.”
“I’m thankful to be a part of the Slingers.”

The Slingers are also thankful that Barkley is a part of the team, too, especially after letting him
do what he can do in his debut. Of course, Barkley is swift to deflect any credit headed his way
after that big game of a first impression.

“I can honestly say [that game was] just playing me my game and my teammates believing in
me. Without my team none of it would have been possible. it was most definitely a team win
and I can’t forget how great the fans were.”

“Our start has been very exciting and filled with a lot of energy.”
For the Slingers fans watching on, they hope that the energy will stay at a high level and that
their team will be as exciting all the way through to the end. After seeing Kentrell Barkley play
in his first game, that doesn’t seem like too much to ask for.