NS Matrix Malaysia become the hottest team in town as they win their fifth straight game while
the Saigon Heat quickly bounce back to their winning ways on the fifth day of the 2023 ABL
Invitational competition in Batam.

The first game of the day was a firecracker as NS Matrix Malaysia exacted their revenge over
the Singapore Slingers, 88-79.

The two teams had already met on the first day of the tournament in Singapore on January 2
where the Slingers were able to win on an outstanding debut from Kentrell Barkley. The
Slingers’ import player shined in the rematch with 20 points, 17 rebounds, and 7 assists to help
his team build up a lead of as much as 16 points, but they would not be able to close things out
this time around.

Instead, it was NS Matrix that would step up in the clutch in this game as they exploded to an
11-0 run to claim their first lead of the game with 4 minutes to go and never looked back. The
catalyst of the late-game burst was Wong Chong Han who made all of his 8 points and 6 of his 8
assists in the last quarter. Of the 32 points NS Matrix scored in the final quarter, Wong either
scored himself or made the assist. 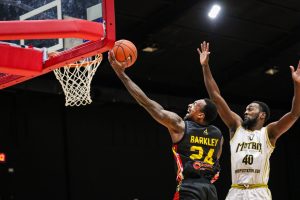 The Slingers met their match down low as the two teams were nearly dead even on both
rebounds and points in the paint, but found it hard to match in terms of long-range shooting.
NS Matrix made 8 three-pointers on 19 attempts while the Slingers connected on only 3 three-
pointers on 14 attempts.

NS Matrix Malaysia are now on a five-game winning streak, the longest any team has gone
through so far this season. Meanwhile, the Slingers get their two-game win streak snapped
once again with one more game left in Batam. 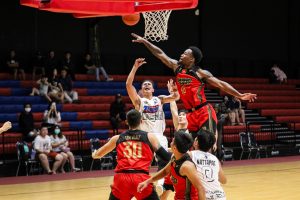 In the second game of the day, the Saigon Heat bounce back into the win column after two
straight losses by beating the Cooly Bangkok Tigers 89-73.

The Vietnamese squad took control early on in the game as they did against Hong Kong Eastern
in the previous game. This time, however, they kept on pushing until the final buzzer even with
Evan Gilyard sitting out this game.

Jaruis Holder continues to be a flamethrower from beyond the arc, connecting on 5 three-
pointers this game and ended up with 21 points. The Heat also got some key contributions from
their local players in this win, whether it was 13 points from each of Vo Ban Kim and Nguyen
Huynh Phu Vinh.

The Tigers did a good job of matching the Heat from long-range with 12 three-pointers of their
own, but were overmatch on the glass as they were outrebounded 55-34.

Jose Nouchantavong (19 points, 6 rebounds, 5 assists) and Wuttipong Dasom (17 points, 8
rebounds) continue to shine for the Tigers who seem to be in a better position compared to
their situation in Singapore, leaving the Batam circuit with at least one win.

NS Matrix Malaysia will have the tough task of facing Hong Kong Eastern on January 17 to keep
their win streak alive. The Slingers, in the meanwhile, get to regroup and will return to face the
hosts Louvre Surabaya on the last day of the competition (January 18). The Saigon Heat will also
play their last game of the circuit on January 18 as they go up against Zamboanga Valientes.