Hong Kong Eastern stay undefeated with a tough win over Macau Black Bears, while Louvre
Surabaya get their first win in the fourth day of action in Singapore.
Louvre Surabaya won their first game of the tournament with a strong fourth quarter to keep
Cooly Bangkok Tigers winless, 124-97. 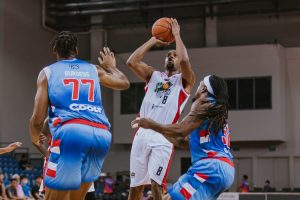 In a shootout between the two teams that saw a combined 196 field goals attempted, Louvre
Surabaya kept their foot on the gas to outscore their opponents 34-12 in the fourth quarter.
Marcus Hammonds had a second straight game of scoring over 30 points, finishing with 39 to
go with 8 rebounds and 4 steals. Down in the paint, it was Alioune Tew who had 36 points on
16-22 shooting along with 22 rebounds.

For the Bangkok Tigers, AZ Reid already had a double-double by the end of the first quarter and
ended the game with 33 points and 18 rebounds.

Both teams struggled to stay in front of one another and couldn’t keep each other off the glass,
collecting 23 offensive rebounds each to keep their possessions alive. 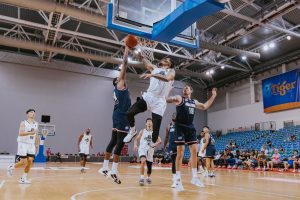 The second game in the day would be more closely contested as Hong Kong Eastern outlasted
the Macau Black Bears, 81-75, to keep their record perfect.

The Black Bears were the first team to make a major change in the 2023 ABL Invitational, with
former Saigon Heat import player Deangelo Hamilton rostered in for Winston Shepard in this
game. Hamilton manned the paint for the fast-paced Black Bears, who battled their way from
trailing through most of the first half to build up a lead of as much as 5 points early in the fourth
quarter.

The offense of the Macau-based club was once again shouldered by the one-two punch that is
Isaiah Wade (29 points, 12 rebounds, 6 three-pointers) and Jenning Leung (22 points, 6 assists,
4 three-pointers), but it was not enough to keep their lead intact to the final buzzer.
Hong Kong Eastern kept their cool despite losing control of the lead in the second half and
charged their way back up ahead for good with a 12-0 run early in the final interval. The run
was sparked by O’Darien Bassett who ended up with 24 points, 6 rebounds, and 5 assists,
highlighted by multiple clutch plays initiated down the stretch. 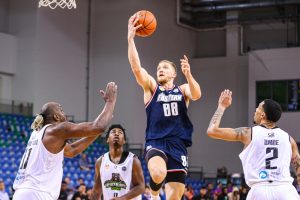 Hong Kong Eastern’s win sets the stage for a clash between undefeated teams on Saturday
(January 7) when they go up against the home team Singapore Slingers. The two teams are
fierce ABL rivals, having faced each other in the Finals back in 2017.

Louvre’s win moves out of the winless group of teams that includes the Cooly Bangkok Tigers,
NS Matrix, and the Macau Black Bears. The Indonesian club will also return to action on
Saturday (January 7) against the currently undefeated Saigon Heat.

The Macau Black Bears will be the quickest to get back on the court as they anticipate a game
against NS Matrix Malaysia tomorrow (January 6). Both teams are currently winless, but one
will leave with a victory in their hands.

Cooly Bangkok Tigers get a lengthy rest of two days until they play their final game of the
Singapore Circuit against Macau Black Bears on Sunday (January 8).