Triple-header Sunday in Batam saw a trio of three closely competed games to the
entertainment of the fans that packed the Hi-Test Arena.

The Singapore Slingers bagged the first win of the day, stopping the in-form Macau Black Bears
after a three-game win streak, 88-81. Additionally, the Slingers begin are now on a win streak of
their own with their second consecutive win after suffering two straight losses.

The Black Bears started off in control with the lead early on in the game, but the Slingers took
the change in the later stages off the game. The 8-0 run by the Slingers late in the fourth
quarter confirmed the victory for the Singapore-based club.

The Black Bears actually shot well from beyond the arc at 41 percent on 29 attempts, but
struggled scoring closer to the basket with the Slingers defense making things difficult inside.
The Slingers’ trio of import players all ready the 20-point mark with Kentrell Barkley (22 points)
leading the team. Barkley also grabbed 11 rebounds and dished out 6 assists while also getting
2 steals and 2 blocks. Xavier Alexander (20 points) had a similar line with 5 rebounds, 7 assists,
2 steals, and 2 blocks.

Dequan Abrom led the Black Bears with 24 points, though leading scorers Isaiah Wade and
Jenning Leung struggled a bit as they combined for only 26 points on 10-28 field-goal shooting.
The second game of the day was another clash of ABL legacy teams between the Saigon Heat
and Hong Kong Eastern. While the Saigon Heat took over in the first half on hot-handed three-
point shooting, Eastern would come back to win it 89-82 in the end.
The Heat’s fiery first half was a result of the sharpshooting from Jarius Holder who had 21
points on 6 three-pointers in the first two quarters alone. However, he’d only end up scoring 3
more points in the second half. 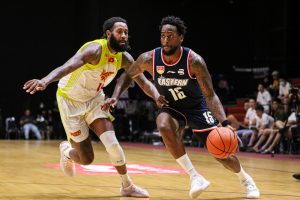 Hong Kong Eastern then took advantage of their inside presence in the second half and kept
exploiting that advantage all the way to a victory. They would end up scoring 52 points in the
paint and outrebounded the Heat 38-18.

Big man Chris McLaughlin owned the shaded area with 31 points on 13-15 shooting from the
floor while also gobbling up 18 rebounds. Dominic Gilbert also had his way as he had 20 points
on 9-14 field-goal shooting to go with 5 rebounds and 6 assists.
Aside of Holder, the Heat also got 19 points and 5 rebounds.

The final game of the day was a hopeful one for the home team as Louvre Surabaya faced the
winless Cooly Bangkok Tigers, but it was the Tigers who would leave the arena with a smile as
they claimed their first victory 88-84.

Louvre had actually clawed their way back from a deficit of as much as 18 points with a chance
to tie the game in the final seconds, but Yericho Tuasela’s layup attempt was wiped clean by
Alex Smith. 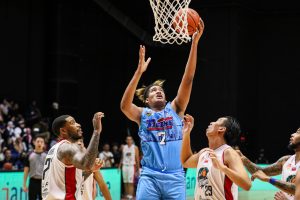 While Smith’s impact came more on the defensive end (2 points, 13 rebounds, 3 blocks), it was
fellow newly recruited import player Jose Nouchanthavong who was the main catalyst on the
offense. The star guard flirted with a triple-double of 15 points, 11 rebounds, and 8 assists.
Leading the way in scoring was Wuttipong Dasom who had 24 pooints on 11-14 shooting from
the field. The Tigers also got 37 points off the bench, sparked by the resurgence of Takamin
Sirijariyaporn (15 points) and Hiran Boateng (14 points).

The home team got a monster scoring game from Marcus Hammonds (35 points, 12 rebounds)
and Jamarr Johnson also got a double-double (21 points, 11 rebounds), but they will need more
than that if they want to end this home stand in Batam with a win.

The Singapore Slingers will get right back onto the court on January 16 in a heavyweight clash
against NS Matrix Malaysia, as will Cooly Bangkok Tigers and Saigon Heat who will face each
other on Monday as well. The Macau Black Bears (vs Zamboanga Valientes) and Hong Kong
Eastern (vs NS Matrix Malaysia) will wait to play on Tuesday (January 17), while the home team
Louvre Surabaya will wrap up the Batam circuit on Wednesday (January 18) against the Slingers.